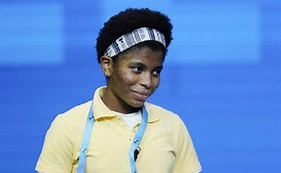 Fourteen-year-old Zaila Avant-Garde made an historic win on Thursday as she became the first African-American winner of the Scripps National Spelling Bee.

Through her win, Avant-Garde, from Louisiana, has broken a record in the competition’s nearly 100-year history, Forbes reported.

The Scripps National Spelling Bee was inaugurated in 1925.

Before Avant-garde’s win, the Spelling Bee had only recorded one Black winner, Jody-Anne Maxwell who represented Jamaica in 1998.

The 14-year-old Avant-Garde gained victory by correctly spelling the word ‘Murraya,’ a type of plant, and is eligible to receive a $50,000 cash prize for her win.

In second place is 12-year-old Chaitra Thummala from San Francisco, who wrongly spelt ‘Neroli oil,’ but is still eligible to receive $25,000 as her runner-up cash prize.

The 2021 spelling competition took place in front of a live audience at the Walt Disney World Resort near Orlando, Florida.

The US First Lady, Jill Biden, attended the finals and had met with the finalists and their families before the competition commenced.

As a skilled basketball player, one of the records held by the 14-year-old include the most number of bounce juggles in one minute.

Mercy Wambua, the CEO of the Law Society of Kenya, protesting outside the Supreme Court