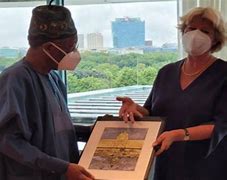 This was disclosed by the German Minister of State for Culture, Monica Grutters, The works of art were looted from Nigeria in the 19th century during the European incursion of Africa.

Segun Adeyemi, the spokesman to the Minister of Information and Culture, Lai Mohammed, in a statement on Thursday, stated that Grutters made this known in Berlin, Germany, on Wednesday, at a meeting with Lai Mohammed and the other delegates.

According to Adeyemi, Grutters, while describing the issue as “an important personal concern”, said,”the way we deal with the issue of Benin bronzes is important to addressing our colonial past”.

He noted that the German Minister noted that Germany was ready to make a “substantial return” of the 1,130 looted artifacts.

“She disclosed that the 1,130 artifacts would be returned to Nigeria from the beginning of 2022,” the statement said.

“Prof. Gutters noted that the fact that Germany has twice sent delegations to Nigeria for talks over the planned repatriation is an indication that both sides have moved beyond mere talks, saying all the Museums in Germany that are holding Benin Bronzes have agreed to cooperate.”

The noted that the Nigerian Minister who was the head of the Nigerian delegation said: “the return should be whole rather than substantial”.

“He also said the issue of provenance, which has to do with the place of origin of the artifacts, should not be allowed to unduly delay the repatriation of the artworks, adding that they are known as Benin Bronzes is already a confirmation of their source of origin (which is Benin),” he said.

The statement said later at a meeting with Heiko Maas, German foreign minister, Mohammed said there should be “absolutely no conditions attached” to the return of the artifacts, which he described as an idea whose time has come.

Senate rejects use of electronic transmission of election results – PDP describes move as preparation for rigging of elections.

A CRISIS OF CONSENT IN UN PEACE OPERATIONS. By: Anjali Dayal